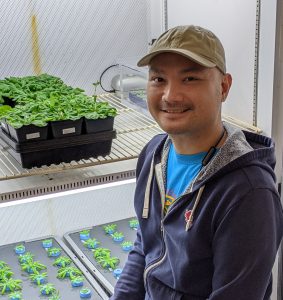 Anne-Sophie Bohrer – Tell us about your background and what led you to become a postdoc at Michigan State University.

James Santiago – I am originally from the Philippines and I did my undergrad at the University of the Philippines. I was an agriculture major, specializing in horticulture production. Within that specialization, I chose to focus on plant tissue culture. Although it is now a tool we routinely use in plant biology research, at the time, tissue culture was mind-blowing to me because I had never seen a plant grown on a gel medium! It really sparked my interest in plant biotechnology.

I discovered I love doing research during my undergraduate senior thesis and decided to apply for a master’s degree. I just didn’t know where to go! One day, out of pure luck, a retired botany professor visited the lab I was doing my senior thesis at – she saw me working and asked if I was a graduate student. When I told her I wasn’t, she just said “Great, would you like to study in the US?” Without thinking, I immediately told her yes! She gave me the contact information of a friend of hers at the University of Maine and that lab is where I ended up doing my master in Horticulture, working on blueberry production.

I enjoyed my time in Maine (2008-2011) but I knew I wanted to learn more about plants and what happens at the cellular level, so I decided to enroll in a Ph.D. program. I got accepted in the Molecular Plant Science program at Washington State University (WSU) in 2011 where I studied a previously described amino acid transporter and demonstrated its new function in phloem loading of amino acids. I got cool results and I published two papers about it. Hopefully I will end up in a plant physiology book someday!

The day after I defended my dissertation, MSU University Distinguished Professor Tom Sharkey was an invited speaker for a seminar series at my department at WSU. My PI was meeting with him before his talk, but because she couldn’t walk him to his next meeting, she asked me to do it. As we walked, we talked about my future plans. He casually told me the Plant Resilience Institute was just created at Michigan State University and that he was looking for a postdoc! I ended up joining his lab in March 2018. It was an amazing moment because MSU was my dream school to get a Ph.D. from so despite not being accepted in a program, I still was able to come here for my postdoc!

You were just awarded an internal grant from the Plant Resilience Institute. What project will you be working on?

I currently work on common beans – their flowers, and more specifically the anthers (where the pollen is produced), are highly sensitive to high temperature stress. When the flowers are exposed to high temperatures, the early developing pollen grains are being starved of carbohydrates, amino acids, lipids, and much more. The pollen grains then either get aborted early or their viability decreases due to premature death of tapetum cells. From this understanding, we conceived a single nuclei project to study how high temperature initiates tapetum program cell death and identify the actors involved in this process.

With the single nuclei technology, we can freeze what is happening in the anthers during the heat stress. We collect about a couple hundred flower buds from tomato, and we extract the nuclei from every cell in every tissue. Then we screen for the type of cells we are interested in specifically, extract DNA and perform differential gene expression analysis.

What was key to the success of this proposal is that everyone in the plant community at Michigan State is so helpful, collaborative, and supportive of each other. To properly develop this project, I sent an email to Assistant Professor Bob VanBuren, whose lab at MSU specializes in genomics and genetic analysis of natural adaptations in plants. Even though I had never interacted with him before, he agreed to collaborate with us. With his expertise in analyzing genomic and transcriptomic data, he will be my mentor on this aspect of the project, which is a great opportunity for me!

Can you tell us a bit more about the process of writing the grant and budgeting for it?

I met with Robin Buell in the early days of the conception of the project- since her lab focuses on the genome biology of plants, she has a good understanding of the budget it would require for this project. I learned that when you write a budget, you need to really be thinking about all the costs related to the project, from cost of planting the seed to getting that manuscript accepted and paying for the publication fee!

The proposal was accepted for $88,000 for one year and can be renewed up to 3 years. This grant includes my salary for one year, the supplies, the costs related to the external services I will use but also growth chamber rental fees and travel expenses.

What are your professional plans and hopes for the future?

I have been applying to faculty positions since 2019, targeting research-intensive (R1) universities. This project is funded for one year for now, renewable up to 3 years. My goal is to publish a high-quality paper from this study, especially since there aren’t a lot of publications using this technology on plants yet. I’m hoping this is going to be my “golden ticket” and what puts me on the map.

My hope for the year ahead is to land a faculty job or a fulfilling job in a private company. Even though hard work is crucial, I also remind myself that timing is everything – it might take longer than I plan for to transition out of my postdoc position. I am happy at MSU and I have the possibility to renew my current grant so I wouldn’t mind staying a year or two more if I don’t get any job offers!*

* Since our discussion, James accepted a position as R&D Plant Physiologist at Soli Organic in Virginia!

Beyond work, what other goals do you have for the coming year?

I would like to travel more. I am from an archipelago; I am an island person, so I really want to go back to the beach!

To wrap it up, and to know more about you, tell me what comes to mind first in this rapid round of questions!

Favorite way to spend a day off – Take a nap!

What would you do if it wasn’t research – I would be a veterinarian because I love dogs!

Note: The Filipino soy sauce and vinegar from the brand “Datu Puti” can be found at the Asian grocery store next to Whole Foods.

Back
Register for a Postdoc Orientation

Register now for a Postdoc Orientation!